NY Magazine, you should be ashamed... 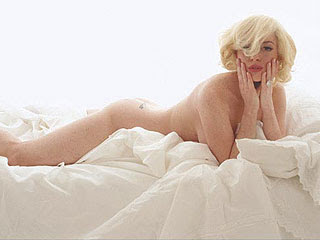 ...for trying to pass off a two-bit celebrity like Lindsay Lohan as Marilyn Monroe.

It just offends me, for the following reasons:

1. Lindsay Lohan is about as far a cry as you can come from the Grand Dame of blonde bombshells. She is famous for starring in lame remakes like The Parent Trap and Herbie: Fully Loaded, being busted for fabulously messy DUI's, and spending more time in rehab than most bonafide adult alcoholics. Marilyn is famous for being indescribably sensual, a comedic genius, and embodying a je ne sais quoi that is leaps and bounds beyond anything Ms. Lohan represents.

2. Lohan does not even make a good blonde. She's a much better redhead or sultry brunette. As a blonde? She looks washed out and weird. A hot Ann Margaret look-alike maybe, but Marilyn? Please.

3. The Lohan shoot parodies Monroe's final photo-shoot before her tragic, untimely death at age 36. Show some respect, NY Magazine. I get that you needed to feature someone impossibly young here, so the 21-years-old thing doesn't bother me nearly as much as your choice of such a mediocre subject. At the very least you could have used a blonde worth her artistic salt for such a shoot, like actress Scarlett Johanssen. Instead, you settled for a mediocre actress who hasn't done a single interesting film in her adult life (Mean Girls aside, for it was essential a teen movie), famous simply for being famous.

I repeat, you should be ashamed, NY Magazine. This is false blonde prophecy.
Posted by Kitty at 6:37 PM

I saw this yesterday and was wondering if it would make you angry! I agree completely...she couldn't be more wrong for the shoot.

i agree that she does not look her greatest blonde. but she is super gorgeous as a redhead! and curvy suits her well. she was a poor choice for the marilyn look. scarlett johanssen would have been much better! btw Mean Girls rocks! :P i love that movie.