the blonde of the week: Queen Elizabeth I of England 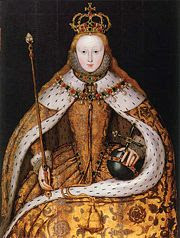 The Virgin Queen. Gloriana. The Faerie Queen. Good Queen Bess. These were nicknames for Queen Elizabeth I of England, one of England's most beloved royals and a legend in her own time. Queen Elizabeth was also a blonde. 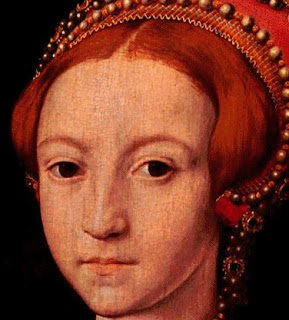 "Attentive schoolgirls may remember being told that Queen Elizabeth I had auburn hair," writes Joanna Pittman in ON BLONDES. Indeed, early portraits of the Queen such as this one, thought to have been painted by Elizabethan female court painter, Levina Teerling when Elizabeth was thirteen, show her as a bona fide redhead.

So...what happened? Queen Elizabeth was a brilliant self-promoter, that's what. Right around the time England defeated the Spanish armada, thus forever cementing her association with one of the greatest victories in British history, Queen Elizabeth made the transition into blonde. At the time she was 55-years old, her real hair already grey and thinning. But she will be remembered for time immortal, thanks to her large, trusty collection of wigs, as an ageless, wrinkle-free blonde.

Elizabeth's reign was recognized by her public as one of "exceptional prudence and felicity", but it was the Armada defeat of 1588 that sealed the deal for Queen Bess. According to Pittman, "it provided the final impetus for the creation of a Queen Elizabeth cult."

Why did Elizabeth choose blonde? Because in 16th century England the color held potent, powerful symbolism. In addition to being a key component of the Elizabethan ideal of femininity, it also conferred a non-negligible association between the Queen and all things holy. As you may recall, the Queen never married: she pitted suitors against one another throughout her lifetime in the end rebuffing them all. At age fifty-one she refused the hand of her final suitor (the French Duke of Anjou, a man half her age) and her foreign policy ministers finally took the hint: the Queen would never marry.

Thereafter Queen Eliz became immortalized as "the Virgin Queen" and subsequently deified for her virtuous piety. Scared images of Christ, the saints, and the Virgin Mary had recently been "removed from England's churches and rejected as idolatry", leaving ample room for a new brand of virgin-worship: the cult of Queen Elizabeth.

Throughout her life Queen Elizabeth keep close tabs on artistic representations of her image throughout the kingdom. It is rumored that she had her public relations officer issue a "pattern book by which officially sanctioned artists would be able to produce 'correct' images ." In 1596, towards the end of her life, she had "unseemly portraits sought out by government officers" and turned into fuel for the fire.

In official portraits her likeness marched on: aloof, otherworldly, and in increasingly lighter shades of blonde. They were produced with perhaps even greater vigor after her death. Writes Pittman:

"She was a golden ruler of a golden age, and her blonde hair was part of this divine unreality." 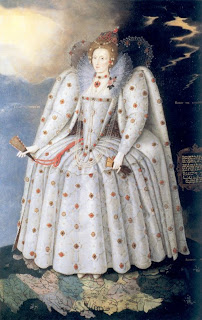