My favorite thing about Arizona so far? Cacti growing everywhere. There are many kinds, but most satisfyingly, there are tons of this species that look exactly like this: 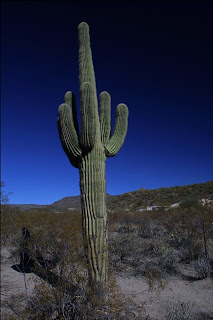 Just like in a Looney Toons cartoon, right? If you asked me to draw a picture of a cactus, though I have never actually seen one in it's natural habitat before and I'm certain there are thousands of species of cacti, a crude rendering of this image is exactly what I would have drawn.

And here it exists in real life, in all of it's stereotypical glory. Without a shred of irony. Like watching Italians press their hands together and shake them to you in prayer position while saying "Grazie, Grazie" in Rome. Or watching French people chain smoke while sipping lattes in Paris.

To come: a photo of me in front of one. Preferably in a sombrero.
Posted by Kitty at 10:00 PM