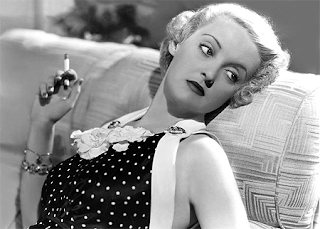 If Bette Davis were alive, today she'd turn 100. Some interesting articles about her career and her successes can be read here and here.

A two time Oscar winner, the indefatiguable Davis hailed from the Bay State (one source says Lowell, another Newton -- I'll have to do some more research to be sure.) I can't think of a single actress working in Hollywood now whom I'd compare to her -- they just don't make 'em like they used to.

More on Bette Davis later as she's a (sometimes) blonde who truly catches my fancy and always has -- for now, let's raise a toast to the Grand Dame of a bygone era by trying one of these, which she sipped on camera in the film Dark Victory, which she appeared in with Humphrey Bogart and Ronald Reagan. (I'd like to also give a shout out to one of my fellow LUPEC Boston broads, who chose this cocktail as her namesake.)

Stir with ice & strain into a cocktail glass.