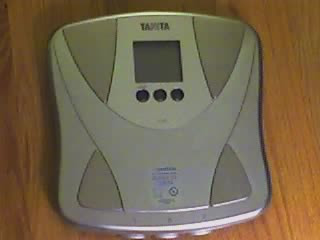 The scale that I bought from Target.com came in the mail today. I have avoided owning such a thing for my entire adult life, preferring to take a "don't ask-don't tell" approach to the number that is my weight. On the one hand, I realize that numbers can be deceiving, and that a person's general health can have very little to do with some magic number they conceptualize as their ideal weight. On the other, I realize that I have obsessive tendencies, and have avoided purchasing one for fear that if I did, I would torture myself with it.

However, in light of this post, I thought it might be a good idea to bring a little reality to the business of my body image issues. Who knows? Maybe having a scale in the house will be a good thing? Maybe it will help me stop worrying about the unknown so much, deter me from deciding that I have magically gained ten or fifteen pounds when I have no material reason to believe that is the case. And it might be nice to know, for once and for all, exactly how many pounds I gain from water when I have PMS (somewhere in the vicinity of 1-3 I think, but to my crazy mind, it usually feels like ten.) So, I made the Mathematician buy us a scale using his company discount on Target.com. He likes gadgets & selected a fancy one. I have been eagerly anticipating it's arrival since its purchase Sunday evening.

I unwrapped the scale and squealed with glee when I realized that it can not only measure my weight in pounds and kilograms, it also measures my total fat percentage AND the total percentage of water in my body. (I do not know why the latter is important.) I liberated it from its plastic packaging, plugged in the included batteries, and briefly skimmed the instruction booklet (so as to avoid blender-melting disasters like this one) before giving it a go. The question loomed. Would our new scale be my friend or my foe?

I then immediately weighed myself eight times in a row.

The first time I got on it, the scale told me I weighed about 2 pounds more than I thought I should. Foe I thought, and narrowed my eyes at my new enemy. Then I realized, Oh, wait. Maybe I should take off my shoes. And , while I'm at it, my clothes. Jeans are heavy.

The second time I got on, the scale reflected what I considered to be a much more acceptable number. Friend! I smiled. Welcome to your new home.

The third time I weighed myself, I was disappointed to see that it was accusing me of being 55.5% body fat. Foe, I scowled. I hate you! How dare you call me half fat!!! Then I read the instruction booklet, and realized that was the water percentage number the scale was reporting, not the fat percentage, and being 55% water is goo. Friend!

The fourth, five, sixth, and seventh time I weighed myself, it was in an attempt to decipher the body fat tabulation offered me by the scale. First it said I was 20% fat, then 23% fat, then 21% fat, then 18%fat. My reactions to all of these numbers: Foe, foe, foe, probably foe but since you're 2% less than the initial estimation and 5% less than the highest, I might like you a little better. Then I referred again to the instruction booklet, and realized that all of those numbers were on the low side of normal, with the 18% figure being below average.

By the eighth time I weighed myself, I realized: Staring at these numbers isn't going to change them. At this point, I've been playing with the scale for, like, 20 minutes. I'm naked and I just weighed myself eight times in a row for no reason, and I would never ever do this if someone else were home. So, I put on my clothes, declared a truce with the scale, and made a new home for it beside my closet.

Friend or foe? Who cares, at least this new appliance is honest. And I need something in my life that can tell it to me straight.

Be careful about the Body Fat % and Water %. Scales of this kind are wildly inaccurate, and according to the percentages you'd be a very very plump girl if they were correct.

Also, weight is a meaningless measure of health, and even how good you look. Muscle is 5 times more dense then body fat, so you could be losing fat, decreasing your clothing size, but also seeing gains on the scale. It's actually what you should strive for, as muscle also ends up burning fat when your just sitting around on your butt.

A pair of fat calipers, and knowledge on how to calculate body fat and lean mass, is a much better instrument to obsess over.