blonde of the week: Jean Harlow 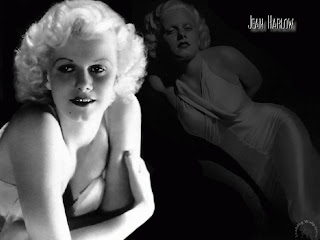 In 2008 platinum blondes are all but common. But it hasn't always been this way. While women have been dying their hair blonde for millennia, starting with the Ancient Greeks, followed by the Ancient Romans, and pretty much every known civilization that followed, the "platinum blonde" didn't develop until early this century, when a young screen actress named Jean Harlow broke into the movie business.

With Jean Harlow the stars aligned perfectly: not only was peroxide safer and more accessible to modern women of the 1930s than for previous generations (though not nearly as accessible as became in the 1950s thanks to Clairol), innovations in lighting and new types of film stock made blonde hair appear lighter than ever before. The talkies were just catching on. Harlow had recently moved to Hollywood where she sort of fell into the movie business...or was pushed into it by her over-bearing stage mother (the real Jean Harlow; the famous young actress' birth name was Harlean Capenter.) A recent divorce left Harlow nee Harlean broke, and necessitated that she work as much as possible to make ends meet. As a result, young Jean appeared in three films that opened at the same time in 1931. Suddenly Jean Harlow was everywhere and her "look" became a sensation.

Harlow claimed that she had never dyed or bleached her hair...but sales of peroxide sky-rocketed anyway. (Legend has it Jean spent every Sunday with a studio hairdresser banishing her roots with peroxide, ammonia, bleach, and soap flakes--so much processing that at one point, it all fell out & she was forced to wear a wig.)

"Flaxen, tow, yellow, gold -- none of these was dazzling enough, modern enough -- to describe the astonishing hair of the movie stars of the late 1920s and early '30s," writes Ellen Tremper in I'm No Angel: The Blonde in Fiction and Film. "It was called platinum, after the jeweler's metal, rarer, even more valuable than gold." Platinum blonde. In 1931, Jean Harlow starred in a film of the same name, based on a young starlet whose life was not unlike her own.

So today, we celebrate Jean Harlow who gave bleach blondes of the 20th century new heights of blondeness to which to aspire.

If platinum blonde is "the lightest shade of blonde hair, obtained by bleaching almost all the color out of the hair and then adding violet and blue tones to give it a white-platinum blonde look", modern blondes of the new millenium have to wonder...