Yesterday I had my very first appointment at Jason's new salon, Escape!

Hair day has become one of my favorite days for sure, and I had been looking to Wednesday all week. Sadly, I woke up feeling under the weather yesterday morning, and because of this I begged off the Repeal Day Party at Green Street. I couldn't miss my ritual reblonding with Jason, though. Besides, I hadn't seen my dear hair-whisperer in weeks! Six-to-eight weeks, to be exact (a.k.a. the amount of time it takes for hair to become all rooty and dirty, as the Unabashedly Girly-Girl puts it.)

I knew the new salon would be different from Liquid, which has begun to feel like home, and felt a slight tingling in my stomach as I approached the long glass doors for my 2 p.m. appointment. It felt kind of like the first day at a new school: I knew my best school friend would be there, and I knew we'd have safety in numbers, but everything else? A big, fat question mark.

And different it was, from the moment I set foot in the door. First of all, it's very quiet at Escape. They keep the music at a really low volume, which is odd, because it's not soft, soothing, water-flowing-over-pebbles-in-a-Chinese-rock-garden spa music; it's bass-heavy, Foundation-Lounge-on-a-Saturday-night salon music. Only played at low volume, so you can still here yourself think. An odd combination, n'est-ce pas? It makes for an intimate, serious mood that I did not anticipate.

And in that new environment, Jason was different. When I used to walk in the door at Liquid, Jason would yell "KITTY!!!" across the room at the top of his lungs in the most excited, welcoming voice. The music was always loud & upbeat, in keeping with the salon-style commotion: water running, hair dryers going at full blast, and a whole mess of client-stylist chatter. When I walked into Escape, Jason gave me the same enthusiastic greeting, only at half mast. Instead of "KITTY!!!" it was more like "kitty."

And also to my surprise, Jason didn't tell a soul in that joint who I was! I mean, the fact that I'm working on a book about hair color & Jason is my stylist is at least mildly interesting...isn't it? I would have thought Jason would have mentioned it to at least someone who worked there. I introduced myself exuberantly to the person at the front desk, expecting them to know exactly who I was, and to be excited that I'm mere months away from having a book deal (I hope!): "Hi, I'm Kitty! SO nice to meet you," I said, and pumped his hand up and down while grinning at him expectantly. He smiled politely and said, "Yeah, I think I spoke to you on the phone to book the appointment..." Not a glimmer of recognition crossed his face.

Stylistically, Escape is more compact than Liquid, and has a sleeker, brighter aesthetic. Less Elvis, if you know what I mean. They don't use assistants, so Jason was with me from start to finish. At Liquid, he was always fitting in a short men's haircut here, a bang-trim there, while I cooked under my foils then moved to the shampoo bowl to have my hair washed and toned by an assistant. At Escape, I had Jason's undivided attention. That part was very intimate and kind of nice.

Of course, my dear Jason did an amazing job, as usual, and I left feeling like a little blonde princess in spite of my sniffles and running nose. Here's a peek at the new locks: 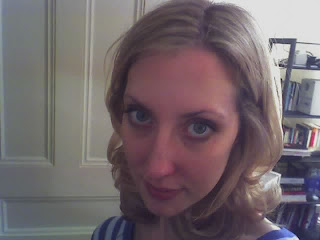 When I was done, my I-have-a-cold-and-just-threw-on-the-first-outfit-I-saw look did not match the runway ready vibe of my hair. From the neck up, I was ready to go to a gala. From the next down? Ready to go to bed.

And that is exactly what I did.

Any fans of Jason should go see him ASAP! We need to make him feel at home in his new, quiet, bright, sleek digs!
Posted by Kitty at 8:05 PM

Your locks are looking gorgeous, Kitty! I don't blame you for following Jason to the ends of the earth...or, the South End, at the very least. It's nice to be all fresh and root-free!

Hi... I stumbled across your blog while googling "Jason" and "Liquid Hair". I've been trying to find him since he left Liquid. Thanks for leading me back to him. I'm not a blond but I loved your blog!