I have missed you! Have you been wondering where I’ve been this week? I’ve been traveling for the holidays since Monday, a week earlier than most, visiting the Mathematician’s family in California. For some reason I assumed that wherever I went while I was on the road, I’d be able to access the magic of the Internet and keep up with posting. And at every turn, I’ve been pretty much foiled. It’s made me realized a few things:

It’s been interesting, trying to do things like keep up with work emails and such while in the company of the folks mentioned in #3. When I asked, “May I use your computer to check my email?” at midnight, one of the Mathematician’s Aunts said, “Of course, sweetie, help yourself,” then looked at me with such concern, that I’d be worrying about work while on vacation.

The Mathematician keeps calling me “Ms. Internet” when he finds me logged onto the computer in those precious minutes, as though he has somehow also become one of those people who aren’t totally dependent upon modern technology. This is interesting, because he works at Intel.

I wish I could say that this time away from the computer has been a refreshing change of pace, a nice respite from my everyday life that has helped to refocus my priorities. Instead, I’ve felt constantly worried that real life is passing me by, and that I’m doomed. Upon my return to work, I will find that the sky has fallen, my blog readership has dried up, and that Oprah and the Today Show have been trying to contact me all week via email, and that I have f***ed up the biggest booking of my life while on vacation. It’s been stressing me out all week. 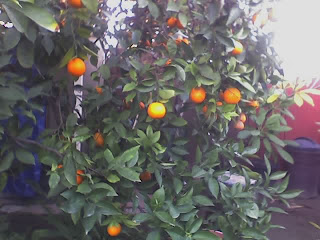 Then yesterday afternoon I opened up the shades to the bedroom where I’m staying at the Mathematician’s dad's house in Orange, and this is what I saw.


After two days of traveling from Sacramento to Tahoe to Reno via car, and a 22-hour trip from Northern Cali to Orange County in the tricked out motor-home, we had finally landed in a place where I had infinite computer access, but did I run to log on? No, I actually went outside and took that picture.

Then I took a picture of this. 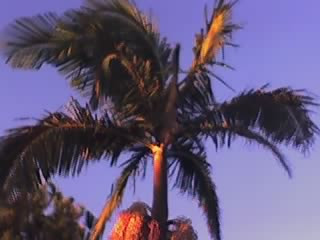 As I wandered around the the Mathematician's dad's backyard, I thought about how orange trees must seem so mundane to people who live out here. But to me they are exotic and beautiful. Until I was in my 20s, I thought oranges grew in those baskets where you find them in the grocery store. And palm trees have always been a shining symbol of tropical lands. To my snow-weary east coast eyes, the backyard was an exotic jungle.

Vacation hasn’t been half bad.
Posted by Kitty at 2:15 PM