olivia and the goldie locks

Today we had a staff meeting at the 647. We usually have these about once or twice a year, to whip the new staff into shape, and to just generally make sure that we're all on the same page about how we do things here in Andyland. Staff meetings at 647 can be recognized by the following things:

Today, they presented me and my co-workers Alexander and Tanis with flowers. Why? Because we've all worked at 647 for almost 5 years. It was a token of appreciation and thanks, and totally made my day. I've rarely gotten flowers "just because," and have never gotten flowers at all from a boss, much less "just because" flowers from a boss. Shucks. 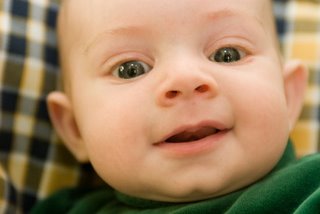 A surprise guest of today's meeting was Olivia (who is pictured here) the amazing, gorgeous ten-month-old baby of Tanis. Olivia was dressed up all in pink: pink camouflage shirt, pink hat, pink cotton pants (not unlike the short pink Victoria's Secret sweatpants I'm wearing as I write this.)

Olivia was way into me when I was first saying hello to her, as most babies are. I think this is because I wear jangly, shiny jewelry and open my eyes real wide and smile as big as I can, and they like that. After just a few seconds, though, she started looking all above and around my head, like she was looking past me, with this pensive look on her little face. Whatever she was looking at, she was considering it very deeply.

"Blonde hair, baby, that's what that is!" Tanis says to Olivia.

"What? Really? Is she actually looking at my hair like that???" I am appalled. Now she is frowning, as though she doesn't know what to make of it all. Then she glances quickly back at my eyes, and breaks out into a big baby grin. Presumably this is because I am opening my eyes really big at her.

"Oh my god, is she scared of it? I know it's really...voluminous today." My hair is in fact, enormous, a real tribute to my Jersey roots. Thank you 2 weeks of frizz-inducing rainy weather.

"No," said Tanis , bouncing beautiful Olivia on her hip. "She's just not used to seeing it that often." Which is true: Tanis's hair is brown, and Adam, her husband, rocks a Bruce Willis-sexy, shaved head.

An hour or so later, Tanis hands Olivia to Auntie Kitty while she cleans up the mess Olivia made by throwing bits of the aforementioned pastries from Flour all over the floor. Immediately the baby wraps her apricot-sized fists firmly around a chunk of hair on each side of my face and tugs. In fact, before I know it she is all tangled up, but tugging ever so gently, so we're cool.

Now I know why so many moms rock short hair.