Jason, where art thou? Part deux

From Joanna Pitman's ON BLONDES, describing a hair trend started by the beautiful daughter of the Emporer Titus the first century AD:

"Professional hairdressers were employed, devoted teams on whom powerful beauties depended utterly for their reputations. Touching epitaphs still survive, composed by ladies mourning the deaths of their most able and loyal hairdressers. These women, highly skilled in their intricate art, mixed the thick hair dye, slapped it on to the hair in a slick of shining slime, rubbed it vigorously into the scalp and then scraped it all off hours later when dry. They washed the hair, dried it, applied further colouring powders and then embarked on the tricky business of styling. This was a task in which success brought rich rewards, while failure sometimes resulted in stabbings with bone hairpins or worse by disgruntled mistresses."

Times have not changed so much, have they? Just days ago, I mourned the "disappearance" of my stylist Jason. My dear, sweet, Jason, who for some reason, no longer works at the salon that has been my second home for two years....

And in the same breath, I cursed him. If he were here right now, I just might stab him with a hairpin for failing to deal with these disastrous roots. 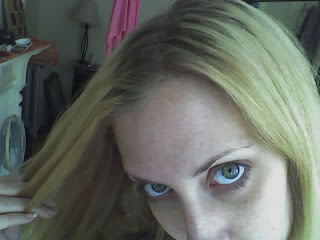