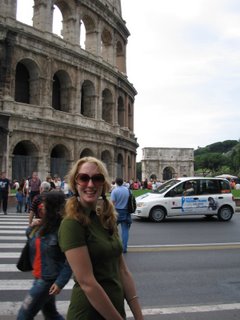 I’m back! First of all, I am a total delinquent in posting, and how silly of me for even thinking that I could post while away. Duh. It’s bad enough that I had to work while traveling (just an hour or so a day, but still), the last thing I felt I could make time for while hotfooting it around the continent was more sitting in front of the computer, even if it was to write, which is something I love. Instead, I detailed the nuances of my blondeness in Italy and Prague a little pink journal. How cute.

I’ve got so much to ruminate upon from the trip, but the abbreviated blanket statement I can make about how blondes fare in Italy is this:

Blondes brunettes, redheads, whatever—you are completely invisible as a woman Italian culture if you are with a man.

If you are NOT with a man, however, but walking down the street with a girlfriend, or heaven forbid, by yourself, you will be lavished with lots of attention, freakish amounts of attention, so much attention in fact that you may be left wondering if you have something on your face or if you’ve accidentally tucked your skirt into your panties and are now flashing all of Rome and the joke is on you.

I can only conjecture that this two-faced sexual harassment happens for the obvious reason that the harasser, who I will refer to as Primate A because behavior like this is truly for the animals, would never disrespect a female in the presence of her boyfriend, Primate B, for fear that Primate B would come to his sweetie’s defense and kick the living shit out of him. Or maybe it’s more subtle than that—maybe men just share an understood, mutual respect for each other that they’d never want to sacrifice, no matter how hot or blonde the woman in question. In any case, this Jekyll and Hyde behavior is something that is a given in my normal life in America as well, and was also true when I lived in Ireland, and I can only imagine that it is as universal as the human inability to subsist without water. And because of all this, our brothers, our boyfriends, and our fathers, no matter how sweet and how sensitive, will never really know what it’s like to be us.

Anyway, the only reason I bring this two-faced behavior up is because in Italy, it was so dramatically pronounced that I felt virtually invisible while I was out and about in Italia with the Mathematician. We’d walk into a coffee bar and the barista would view me with the same measured stare that he seemed to be leveling at all the customers. “Due caffe,” he’d say, with the same businesslike tone he used with the Mathematician. He never cracked a flirtatious smile, or even raised a suggestive eyebrow.

At first I felt silly—both for extending the life of my blondeness so as to be blonde in Italy, and for spending the money on re-blonding to make sure my hair was as bright as possible before I left. “Is my experiment really yielding no results? Is everything that I’d heard about Italianos being abundantly vocal in their praise of anything possessing a vagina a lie? Or perhaps Italian men are impervious to blondes, preferring the dark hair/dark-eyed/olive skinned look of southern Italian women?” Then I had a terrible thought: perhaps I’d somehow…I don’t know…lost it? Maybe I am only easy on the eyes in America?

I started to realize the gig was up somewhere during our first full day in Roma, while the Mathematician and Marissa and I were doing a little sightseeing. We traversed crowded streets, so thronged with tourists and Romans going about the business of their late-Friday afternoon that it was difficult to distinguish us as a group, traveling as three. As we walked I heard comments, whispered to me under the breath, in Italian and I could only understand a handful of words with familiar roots like bella. The minute the Mathematician would emerge from the crowd, appear by my side, or wrap his hand around mine, the comments would cease, the searching eyes of their speaker cast down towards the cobblestone street or skyward, towards the buildings over my head, or occasionally they’d simply watch us pass, innocuous and silent, perhaps relieved that the Mathematician hadn’t heard a word.

Something I did not consider before I left was how vulnerable it feels to spend two weeks in a country where you don’t speak the language. It’s exciting and exotic, for sure, but when you first arrive, after you’ve stumbled off the plane in your jetlagged stupor, been made to feel foolish by airport personnel, taxi cab drivers who charge you twice what you owe because of your American accent, and coffee bar staff who can’t understand why you don’t understand their simple, basic, Italian question about your coffee and pastry purchase, it can leave you a bit raw. For this reason, experiment, project, and book aside, at least in the beginning of the trip, I relished the silence.
Posted by Kitty at 8:48 AM