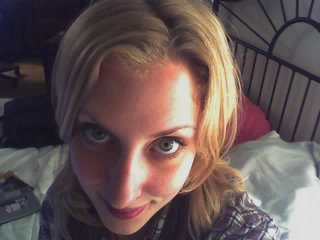 Jason did it! He made me blonde again! Bless him! I feel so much better! Now, I HAD adjusted to the darker version of my hair, mind you. However, this is much more what I am going for. And this will most likely have been my last visit, so I'm going to relish every second and every strand.

As I was sitting in the chair, having my hair blown out, Jason and I overheard the girl in the chair next to me asking HER stylist about going brunette. "I'm thinking of going darker," she said, "what do you think?" She had just a few light layers, and they looked like they needed to be touched up or put out of their misery (she had obviously only visited for a cut that afternoon.) So, her stylist went on and on about the deep chestnut color she could do, or maybe even an auburn.

Jason just looked at me in th mirror and said, under his breath: "She's gonna hate it."

A few minutes later, I heard HER stylist say, "I'm really not into going too blonde." Jason just looks at me again. "I mean, I think it's really easy to end up looking washed out."

Half an hour later, as Jason curled and styled and put finishing touches on my new goldie locks, I couldn't help but wonder if that was exactly what was happening on my own head.

What do you guys think? More pictures (from Italy and Prague, of course) to come...