the blonde of the week: The Virgin Mary 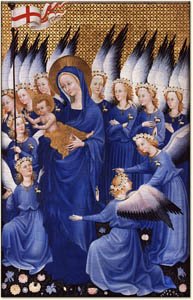 For many centuries, the only leading ladies of Catholicism permitted to be blonde were the harlots: Eve and Mary Magdalene. And this was for good reason: blonde hair was considered synonymous with sex, sexual attraction, and sexual appeal, thanks in large part to Aphrodite, the Goddess of Love, Beauty and Sexual Rapture, a.k.a. the Original Blonde.

Mary, on the other hand, was the exact opposite of all of these things. “Mary was in all ways perfect," writes Joanna Pitman, author of On Blondes. "One of her many distinguishing characteristics was her freedom from carnal desire. Not only had she been conceived immaculately by divine intervention, but her purity had been preserved by the miraculous birth of Jesus Christ.” She was without a doubt the purest woman in all of Catholicism, and as such it makes sense that she be visually depicted as a brunette, or perhaps more commonly, with hair that was not visible at all, hidden beneath a pious veil.

Thanks to the visions of a Swede named Bridget, all of this changed in the 14th century. Bridget, later to become St. Bridget, first began to receive visions when she was just 7 years old. After the death of her husband, King Ulfo, she pursued what I would call a seriously religious life, eventually denouncing her place in her court and her title as Princess, and turning to a life as a woman of the cloth in the service of God. She went on to found the Bridgettine order.

Bridget’s visions were extremely popular during her life, and even more so after her death. They were originally written in Swedish and translated into Latin, but these revelations were in such high demand that they were eventually translated into most European languages. According to Pittman, “Within a few decades of her death in 1373, the revelations became a standard part of the works of devotion.” St. Bridget’s visions had wide appeal, and even longer-enduring effects. Here is how Bridget envisioned Catholicism’s first lady during the nativity (quoting from Joanna Pittman’s translation in On Blondes):

“I beheld a Virgin of extreme beauty…then the virgin pulled off the shoes from her feet, drew off the white mantle than enveloped her, removed the veil from her head, laying it by her side, thus remaining in her tunic alone with her beautiful golden hair falling loosely down her shoulders…”

It wasn’t long before artists began to incorporate these images into their renderings of the Madonna, casting her as a luminous, transcendent blonde for all posterity, and creating a serious dichotomy in the symbolism of the blonde. All of this thanks to a Swedish saint named Bridget.

Hmm…she was Swedish after all...is it possible that Bridget was blonde herself?
Posted by Kitty at 10:05 AM

The Virgin Mary was from the Middle East. Odds of her having blonde hair? Almost none.

Right...as I clearly state in this entry, I am referring to artistic renderings of Mary by European painters in the middle ages. Of interest in this case is the changing symbolism of blonde hair over time. I'm content to leave factual discussions of what Mary looked like to historians and archaeologists.

Whether Mary was from the Middle East or North Dakota (unknown then) it wouldn't matter since your article also stated that, "[she] had been conceived immaculately by divine intervention", which may also include 'hair color' that was not 'normal' during that era!

There were and still are many blondes throughout the Middle East and North Africa, dating back long before The Virgin Mary was born.

I is possible that Mary might have been blond. You will recall that Israel at the time of Christ was divided into Judea, Samaria, and Galilee

Now many of the Philistines were settled in Israel (Hence the term Palestine) and ancient Egyptians of the Philistines (whom the Egyptians called People of the sea) shows a tall blond haired people.They were defeated and thrown out of Egypt and many settled in the coastal areas of Palestine (whereas the Israelites lived in the hilly interior country)
We know that in the time of Christ many of the Jewish religious leaders sneeringly referred to Galilee as "Galilee of the Gentiles"
Could that be because so many were blond and fair of skin?