I've made a terrible mistake...

So, my hair was pretty blonde for a while there. Pretty damn blonde. As in, I'd look in the mirror, and occasionally think to myself, "Gee, is it really that light? Is that really what's happening here? I'm really doing it, aren't I? I'm really, truly, shamelessly blonde." (And somewhere in the back of my mind, an insidious voice would whisper..."Don't you think you look trashy?")

Last time I saw Jason in July, he was very bold with my color. He told me "you're not going to believe this, but we're going lighter." He said he couldn't believe it himself, but that we were taking a risk, a risk he'd ONLY take with me because ONLY I could work hair that light, and well, I'm writing a goddamn book on being blonde, aren't I? So, we went for it. Bold was what we did. And when the smock came off and the hair was blown out, there I sat the blondest I'd been since I was a little girl. I was the same shade of blonde as my four year-old niece. And suddenly, I was a blonde who wasn't even pretending to be natural. My long goldie locks were just one small step away from platinum, and that was what it all was about.

Now, I trust Jason implicitly. I really do. He is amazing, and I highly endorse his services. If you go to see him, you will never leave his salon looking bad. So, when he caught sight of me while walking down the street one day, and a look of surprise and a mild shadow of concern flitted across his face like a small cloud traversing the sun, I was appropriately worried.

"No, sweetie," he said, his voice the same calm timbre as that of my therapist. "You? Never. You will never look trashy, even if you are wearing a trash bag and a pair of Candies loafers. But...you should come see me next week. I have the morning free all week, you can just call me and come in when you have a second, and we'll have a nice, leisurely morning together. Sound good?" He made it sounds social, like all we'd be doing was a minor touch up while spending some quality stylist-subject time at the sink over coffee and the latest 700-page issue of Vogue.

So I went in. I followed his instructions, because Jason is my darling, and because he would never do wrong by me.

Except now, after our nice, leisurely morning together over coffee & the latest 700-page issue of Vogue, my hair seems...darker. And I am in a mild state of panic.

Jason swore up and down as I was leaving the salon that it was not, in fact darker, rather, he'd added more depth to the color, infused it with more gold, given me a more natural, sun-kissed look, as opposed to the all-over, almost platinum he'd he'd faded me to in July. "I'm only doing this because it's you, honey. I wouldn't do this with just anybody, because not everyone can rock gold. I'd only ever do this with you."

But to me, it looks darker. Everyone I ask smiles, says it "looks good!" and "looks really pretty, I LIKE it!" But I know in my heart what is true, and that is that, no matter what everybody says, my hair looks darker than it did before.

Here is a before picture: 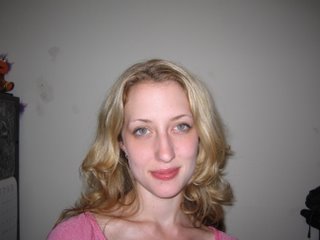 And here, my friends, is the after picture: 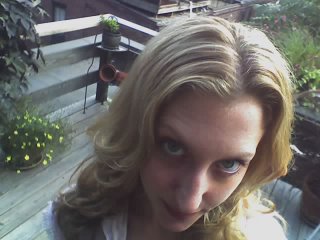 Yes it look more natural, but herein lies the lesson of the story: I know now that I do not want to be natural. Natural left the equation some time ago. Maybe once upon a time I sought to look like a natural blonde, before I undertook this stupid project, back when I was still a nubile young highlight virgin, hoping no one would accuse me of being some sort of blonde poser since I'd taken up the peroxide.

Well, the cherry's been popped, folks, and those days are long gone.

I'll tell you what I want now: I want my hair to be the same almost fluorescent shade of flaxen that it was just a week ago. I want it to be as unnaturally light as the hair of the girl on the bus this morning, and the woman in the grocery store this afternoon, or my little niece Caelan and her baby brother Griffen, and the blonde heads I am beginning to see everywhere I turn. What was I thinking? If those harlots don't care about looking trashy, why the hell should I?

There is only room for blonde on this head. The gauntlet has been thrown down, and for the duration of this experiment, the only way out is up the color scale. Blonde baby. Blonde.

And I am very upset about what to do next because now I am also kind of broke.

I thought it was beautiful! And this coming from the girl who has been walking around for 2 weeks since her last hair appointment with her left side about an eighth of an inch shorter than the right side, and three different shades of honey and brown and copper. If I can rock it, you can handle anything babe!